Conor McGregor was back in his native Ireland recently for some media stuff, including an appearance on the nation’s leading chat show ‘The Late, Late Show’.

The show is aired by national network RTE and this clip was filmed backstage before he went out front to meet the crowd.

Conor has some fashion tips for Joe Rogan and also lays claim to being the modern-day version of Irish hero figure CúChulainn.

CúChulainn (Irish for “Culann’s Hound”) is an Irish mythological hero who appears in the stories of the Ulster Cycle, as well as in Scottish and Manx folklore. The son of the god Lugh and Deichtine (sister of Conchobar mac Nessa), his childhood name was Setanta, also the name of a television network in Ireland.

He gained his better-known name as a child after he killed Culann’s fierce guard-dog in self-defence and offered to take its place until a replacement could be reared. At the age of seventeen he defended Ulster single-handedly against the armies of queen Medb of Connacht in the epic Táin Bó Cúailnge (“Cattle Raid of Cooley”).

It was prophesied that his great deeds would give him everlasting fame, but that his life would be a short one. For this reason he is compared to the Greek hero Achilles. He is known for his terrifying battle frenzy, or ríastrad, in which he becomes an unrecognisable monster who knows neither friend nor foe.

He fights from his chariot, driven by his loyal charioteer Láeg and drawn by his horses, Liath Macha and Dub Sainglend. In more modern times, Cú Chulainn is often referred to as the “Hound of Ulster”. 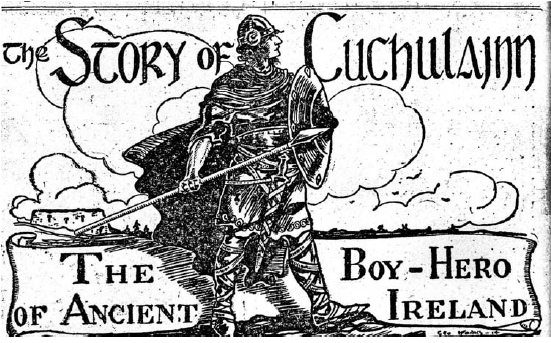