It was the night the Lancashire lad, who was then equally revered and reviled by different sets of MMA fans, came good against all odds.

UFC 199 was all set for a headline act pitting middleweight champion Luke Rockhold against Chris Weidman, the man he defeated to win the title, in an immediate rematch.

However, less than three weeks before the fight was due, Weidman was forced to withdraw from the fight with a herniated disc in his neck.

The UFC were now on the hunt for a short-notice opponent replacement for Rockhold’s first title defence.

Their inital port of call was Ronaldo “Jacare” Souza. The Brazilian had already fought Rockhold before with the American scoring a decision win to earn the Strikeforce middleweight belt. 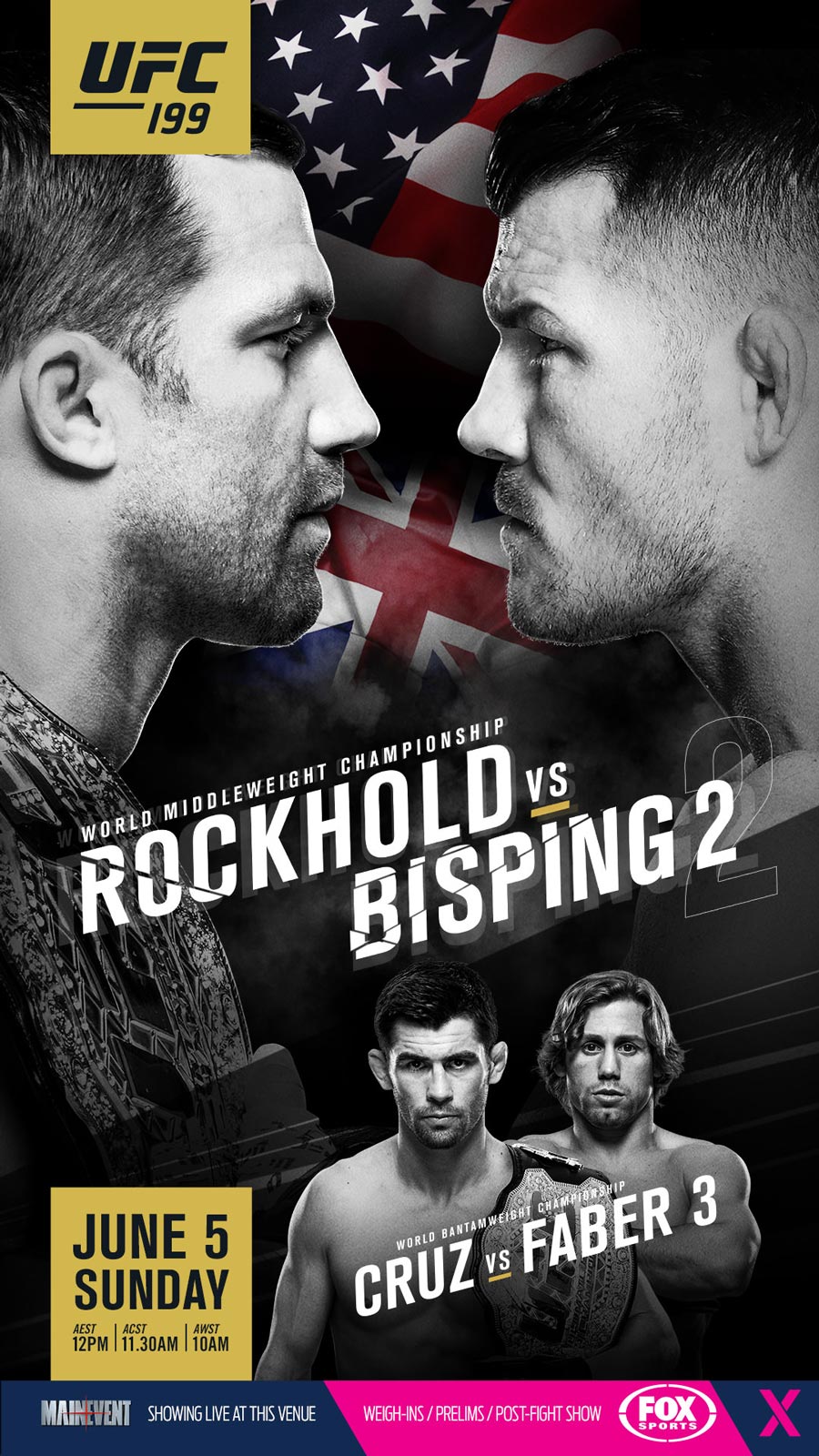 Those plans were quickly shot down after the UFC learned that Souza had injured his knee en route to a TKO victory over compatriot Vitor Belfort just days before Weidman’s withdrawal from the fight.

In his regular vocation of competing in the cage, the Brit was on a three-fight win streak with decision wins over C.B. Dolloway, Thales Leites and former UFC middleweight kingpin Anderson Silva. His last loss? It was against Rockhold less than two years ago.

Perhaps sensing this was his first and last shot at UFC glory, Bisping agreed to the fight and thus became a near-instant betting underdog and understandably so.

The comprehensive defeat “The Count” suffered at the hands of Rockhold was still fairly fresh in the minds of MMA fans. Rockhold’s left shin bone colliding with Bisping’s head, sending the latter crashing to the canvas. Rockhold seizing upon a dazed Bisping and snatching an arm-in guillotine choke to force his foe to tap.

History didn’t repeat itself when the pair squared off for a second time four years ago.

On just 17 days’ notice, Bisping and his team – including widely respected boxing coach Jason Parillo –  expertly devised the perfect gameplan to exploit the deficiencies in Rockhold’s striking defence. It’s a gameplan which has since become somewhat of a blueprint.

Doubling up on his punches each time, Bisping caught Rockhold with a left hook and planted him with an even bigger one seconds later.

Bisping then delivered a furious flurry of punches to the downed Rockhold, forcing referee “Big” John McCarthy to stop the fight.

The pair had now traded first-round victories over one another. However, this would have been far sweeter for Bisping due to the prize on offer, the fight’s circumstances, and the fact their bad blood had reached an all-time high ahead of their second bout.

In one of the biggest title upsets in UFC history, Bisping emerged from the cage with the championship he quite literally fought tooth and nail for.

Bisping would go onto make one defence of his UFC middleweight title against Dan Henderson; another man he had lost to before in memorable fashion (to say the least, in this case).

Like he did in their second contest, Hollway left the cage with a TKO win in their title unification bout, making him the bonafide UFC champion at 145 pounds.

The Ultimate Fighter: Live (season 15) was unique in that the series’ fights wasn’t pre-recorded. Each weekend, there were new, live fights surrounded by the taped events that took place in the TUF house in the days prior.

4 June, 2011 – Tony Ferguson became the Ultimate Fighter we know him as today

Tony Ferguson knocked out Ramsey Nijem to become season 13’s winner of The Ultimate Fighter. Few people would have predicted Ferguson would become the perennial UFC lightweight title contender he is today.

Urijah Faber particularly enjoyed fighting in early June. Not only did he fight on the co-main event of UFC 199 against Dominick Cruz, he also competed in three WEC championship bouts in these dates.

In a catchweight bout, Jake Shields secured a first-round submission win over Robbie Lawler with a guillotine choke in the main event of Strikeforce: Lawler vs. Shields.

It was also the night when little-known heavyweight Brett Rogers shocked the world by knocking out veteran Andrei Arlovski in just 22 seconds.