World MMA Awards: Is Israel Adesanya your Fighter of the Year?

Voting is now open for the 12th annual World MMA Awards. Head here to vote for your favourite fighters and MMA personalities.

Fighters Only has extended the nomination period from 12 months to 18 months (1st January 2019 – 30th June 2020) to best account for all global MMA action and performances.

The star-studded, black-tie 2020 World MMA Awards event will be held in October 2020 on a date and location to be announced.

In the lead-up to the big show, we are profiling each of the 12th annual World MMA Awards nominees.

Big things were expected of Israel Adesanya when he committed to fighting in MMA full-time, leaving his kickboxing career behind. However, few would have predicted how quickly “The Last Stylebender” rose up the ranks.

These past 18 months have been massive for the Nigeria-born Kiwi.

Four fights and four wins, Adesanya extended his unblemished MMA record to 19-0 and the last year-and-a-half has seen him go from contender to defending champion.

Adesanya kicked off his 2019 with a comfortable unanimous decision win over Anderson Silva, the most dominant middleweight champion in UFC history, at UFC 234 in February.

Though Silva is at the latter stage of his MMA career, the Brazilian was Adesanya’s first true striking test in the cage and the New Zealander passed with flying colours.

The fight between Adesanya and Gastelum was an instant classic – it’s also nominated for Fight of the Year in this year’s World MMA Awards (don’t forget to vote for your favourite here).

It was a wild, back and forth war. Gastelum’s punching power was clear to see as he had Adesanya hurt in the first round. A competitive second round saw Adesanya score a knockdown of his own

One round apiece going into the third, Adesanya looked to have found his groove as he landed punches with accuracy.

Though Gastelum looked tired in the third, he really turned it on in the fourth round and had Adesanya hurt on multiple occasions, landing big shots with his hands and a notable head kick. It was Adesanya who now appeared fatigue.

With the fight hanging in the balance, Adesanya threw everything but the kitchen sink at Gastelum, landing a lovely front kick, crisp punching combinations and more. Gastelum’s grit shone as he he somehow survived two knockdowns and two tight-looking submission attempts – a standing guillotine choke and a triangle choke on the mat – as Adesanya poured it on. 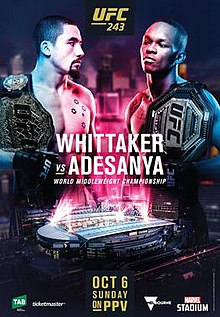 The Last Stylebender totally controlled the fight for as long as it lasted, punishing Whittaker every time he closed the distance to land strikes.

Adesanya picked Whittaker apart and punctuated the fight’s opening round with a big knockdown on the horn.

Things went from bad to worse for Whittaker, who was competing in his first fight since undergoing emergency surgery for an abdominal hernia and a twisted and collapsed bowel.

In the second round, Adesanya continued to consistently land punches and kicks up close and at a distance, while being elusive enough to not really taste any of Whittaker’s power. In a messy exchange of hooks from both men, Whittaker came out worse as he was caught with a left hand which sent him tumbling backwards.

Adesanya finished his opponent off with some big punches on the ground to hand Whittaker his second knockout loss and become the new UFC middleweight champion proper.

Right before the sporting world shut down in a bid to quell the ongoing COVID-19 coronavirus pandemic, March saw Adesanya make the first defence of his UFC middleweight championship belt at UFC 248 in Las Vegas.

His opponent? The middleweight boogeyman that is Yoel Romero.

The fight didn’t exactly live up to its promise of fireworks, but Adesanya fought a smart fight to get the job done against one of the most explosive competitors around.

Romero spent most of the fight in the centre of the Octagon, stalking Adesanya for any potential openings to take advantage of with his speed and power.

However, Adesanya never presented that opportunity and was more than happy to pepper Romero with kicks at range in a risk-adverse, but efficient, manner.

Romero’s urgency increased as the fight wore on, but Adesanya showed off his technical and defensive nous to never really find himself in any degree of trouble.

“It was a hard fight, but I did what I had to do,” Adesanya defiantly said in his post-fight interview after nabbing a unanimous decision and his first UFC title defence.

In 18 months, Adesanya went from an exciting, promising MMA fighter to a man who looks like he will remain UFC middleweight champion for some time.

Four fights, four wins. Still unbeaten with a 19-0 record and now has the UFC gold to match. Impressive stuff from the City Kickboxing mixed martial artist.

Head here to vote for your favourite fighters and MMA personalities.