The last time the UFC named a pay-per-view was back in January 2011.

UFC 125: Resolution featured a main event between Frankie Edgar and Gray Maynard for the lightweight title. The event took place on New Year’s day and both men had a resolution: to win the fight and leave the MGM Grand as champion. So the PPV was aptly named.

However, that logic certainly wasn’t applied to previous events. Throughout the UFC’s formative years, under the management of SEG, every event was given a tagline which followed the official number. It continued in the post-SEG Zuffa period, but was seemingly discontinued after Resolution.

Now we are simply left with numbered events, accompanied by the main event pairing; such as UFC 147: Franklin v Silva; UFC 148: Silva v Sonnen 2; and UFC 149: Faber v Barao. You get the picture.

While the numbers game is tough to follow, especially when events are grouped together in the space of a few weeks, it is understandable to see why the UFC called a halt to naming their events with absurd tag lines, especially when you read this Top Five.

Perhaps the association with pro wrestling – where every PPV has its own name – led to the decision by the UFC to pull the plug on this piece of marketing. So looking back, here’s a list of some of the worst named cards in history. Where do we start with this catastrophe? Well, invincible summed up the mood of the UFC and its owners at the time.

They had just sold a 10% stake of the company at the time, an unprecedented move, especially when the investors were an entertainment group in Abu Dhabai. The world, it seemed was the UFC’s oyster.

To commemorate the deal, the UFC held their first outdoor show to showcase their stars to their new investors in Abu Dhabai. On the card was two invincibles, Anderson Silva, reigning middleweight champion and then-lightweight champion BJ Penn.

Both were expected to display their legendary fighting skills, show they were indeed invincible, and put on the greatest show on earth.

Before Penn took to the cage for the main card’s fourth fight, the card was already a bonafide stinker, especially Matt Hughes’ ‘fight’ with Renzo Gracie. Apart from Mark Munoz’s TKO win over Kendall Grove, the card was looking far from invincible.

By the time a subdued BJ Penn finished five rounds with Frankie Edgar, Penn looked far from invincible as he dropped the title to Edgar. Despite Edgar entering a real workman-like performance, those in Abu Dhabai who expected a flurry of brilliance from Penn were indifferent to Edgar’s win.

For fans in the oil-rich country, it didn’t matter much because they were guaranteed a show when Anderson Silva met challenger Demien Maia in the main event.

What transpired was 25 of the most-bizarre minutes in MMA history. After brutalising Maia for two rounds, Silva spent the last 15 minutes gesticulating and running away from Maia, infuriating the crowd and worse, his boss Dana White. On a huge night for the company – where Dana White and the Fertitta brothers wanted to show that they do entertainment like no other company to their new partners – the company looked anything but invincible. You stack a card full of heavy hitters and name it Knockout. That’s just asking for trouble. In a cruel twist of irony, this card featured no knockouts. Not one. All fights went the distance which rendered the event title useless.

Yes it couldn’t have been foreseen, but before the green light was given and the posters were plastered with the slogan Knockout, surely the possibility of no actual knockouts transpiring on the show should have been brought up.

Originally set to feature the long-awaited fight between Chuck Liddell and Wanderlei Silva, one can see why – at a preliminary stage – it was given such a name.

Even when Keith Jardine was announced as Liddell’s opponent and the card was set to be the stage for the UFC debut of Mauricio ‘Shogun’ Rua, all signs still pointed to at least one knockout or TKO. But it didn’t happen. Even one measly knockout on the preliminary card would have sufficed.

Instead, four of the main card fights went to the decision of the judges. Only Forrest Griffin finished his fight when he submitted ‘Shogun’.

One would have thought that UFC legend Chuck Liddell could save the show with a knockout when he met journeyman Keith Jardine, but ‘The Iceman’ couldn’t put ‘The Dean of Mean’ away and fell to a decision loss. Though not a bad card, the name attached to UFC 87 – Seek and destroy – was rather ridiculous.
I mean when you put two fighters in a cage, there’s not much seeking to be done. Destroying, yes, but the seeking aspect is pretty much eliminated when you put the fighters across from each other at the start.

However the organisation went with the name anyways and on the main card, there were only two stoppages which didn’t really fit in with the destroy aspect of things.

The UFC’s blushes were somewhat spared when it came to the promotion of the DVD as Brock Lesnar hammered Heath Herring’s face with a highlight-reel punch that sent Herring spiraling backwards toward the cage. As Lesnar scrambled to try and finish him it was as close to ‘Seek and Destroy’ as could be, but overall the event didn’t need such a daft title, especially when welterweight champion Georges St-Pierre was defending his title against Jon Fitch.

The champion outworked and dominated the challenger, again discrediting the title Seek and Destroy. Maybe it was to do with Fitch’s position that UFC brass named the PPV after his quest for the title.

Riding a long win streak coming into UFC 87, Fitch could have been seen as a man who was seeking out the champion, on a mission to destroy him. Seems someone forgot to tell GSP to go along with the script as he retained his title in a one-sided fight.

Three fights on the main card went to a decision as Kenny Florian, Brock Lesnar, and St-Pierre got the better of Roger Huerta, Heath Herring, and Jon Fitch respectively. Again, not the worst card in the world, but an absolutely ridiculous name attached to it.
UFC 46: Supernatural UFC 46: Supernatural sums up some of the awful names that UFC cards have tagged over the years.

The only way a card should be named Supernatural is if the organisation booked a deity or a supreme being on the show.

However, despite the naff name, the event did feature a once-off, strange, bizarre act that maybe adhered to the title of Supernatural – After just 45 seconds of action during the main event and the fight was stopped as Vitor Belfort was crowned the new light heavyweight champion due to a doctor’s stoppage.

In the early stages, Belfort slit Couture’s left eyelid with a grazing punch. With his eyelid in jeopardy, Couture was examined by the doctor, who called a stop to the contest. Call it a freak of nature, call it a pure accidental graze, or a supernatural feat, but it certainly did fit the event’s title.

Throughout the event, there was nothing else supernatural about the card.

Carlos Newton failed to make 170lbs to fight Renato Verissimo, which meant their fight was fought at a 175lbs catchweight. Matt Hughes dropped the welterweight title to BJ Penn in the evening’s co-main event before the supernatural did indeed happen in the main event, which sent the crowd home somewhat furious as Belfort was crowned champion without actually having to throw more than a few punches. 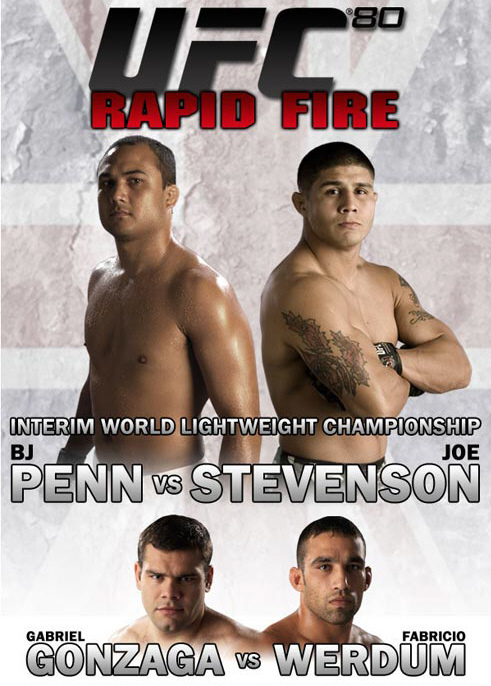 It’s said these days that the UK fans are treated badly by the UFC. Some say the cards brought to the UK are adequate, others say they lack big-name stars. But it wasn’t ever thus.

Back in 2008 at UFC: 80, the organisation brought a title fight to Newcastle as BJ Penn met Joe ‘Daddy’ Stevenson to crown a new lightweight champion after Sean ‘The Muscle’ Sherk was stripped of his title after testing positive for anabolic steroids following his defence against Hermes Franca at UFC 73.

What transpired on the night was something UK fans will never forget as the card lived up to his ludicrous title: Rapid Fire.

The fights were indeed rapid as the action was inside the Octagon ended far too prematurely for those who forked out big money to buy tickets to the event.

Those who arrived early for the first fight of the night got a full 15 minutes of action as Sam Stout defeated Eklund via unanimous decision.

Elsewhere on the prelims, Paul Kelly bested Paul Taylor after three rounds of action, but the other two fights offered up just 1.47 seconds of action.

It didn’t get much better when the main card started as Rapid Fire certainly became more than a fancy moniker.

Jorge Rivera dispatched Kendall Grove in just 1.20, before Wilson Gouveia made light work of Jason Lambert after just 37 seconds in round two. A fast-paced night of fights was not the word.  Those who went for a beer or a bathroom break probably missed the third fight as well: Marcus Davis finished Jess Liaudin with 64 seconds on the clock.

Thankfully for those in attendance, the final two fights went to the second round; Fabricio Werdum defeated Gabriel Gonzaga by TKO and BJ Penn became the new lightweight champion when he submitted Stevenson at 4.02 of round two.

Still, by all accounts, the card was over as soon as it began, quite literally. Four fights on the prelims lasted 31.47 and the main card – comprising of five fights – lasted a paltry 21 minutes and 37 seconds. No wonder UK fans are still fuming after their night of Rapid Fire.

Some other classics include: